The Art of the Record

WARNING OPINIONS AHEAD: I have spent thousands, possibly even hundreds of thousands of hours recording, performing, editing, mixing, and mastering audio. It is my career, my passion, and my vocation. Thinking about and working with audio has consumed the majority of my waking adult life. I am going to condense as much as I have learned as I possibly can and give it to you as a distilled practical framework. Keep in mind these principals are by necessity very simplified, but will still help get you up and running, or if you are already working with good quality audio, they will help you travel further down the path towards excellence. One other note, remember that for every rule there is an exception, nevertheless that exception is so often a tiny minority in terms of its use case that is of more theoretical than practical relevance.

I’ve met so many talented musicians, videographers, and even audio engineers who think they can ignore the basic laws of physics. These individuals are otherwise intelligent, strong critical thinkers who when it comes to audio suddenly become spell casting mystics and advocators of unscientific voodoo. I have sat in a mix session with a talented young musician who was in the process of “making it” and watched in horror as he refused point blank, time and again, to allow the audio engineers present to fix a critical technical error in his work. These days he sells medical products.
If your recording device, FM transmitter, your microphone, your DAW, your audio or midi track inside Ableton/Pro Tools/Audacity/Logic/ or whatever it might be has a red light on it, and that light turns on- STOP. Stop what you are doing and fix it. Not later, not soon, NOW. And not sometimes, not usually, but all the time. I have heard comments like this a thousand times:

“The audio sounds ok though.”

“I don’t think its distorting.”

“That light just comes on sometimes.”

“You can actually go even a bit more than that before it starts sounding distorted.”

“I’ve heard some people actually clip their DAW slightly on the master to make it sound better.”

If this sounds like you, then know this. There are thousands of audio engineers, electrical engineers, scientists, and software engineers who have designed all sort of devices like the one you are engaging with. If you ignore that red light then you are backing yourself over their combined knowledge and expertise. So don’t do it! This may mean you have to turn everything else up or down. It may mean you have to go back into your gain structure and fix other places where you might have gone wrong. But you must, because the alternative is permanently mediocre results. Spend that annoying 30 seconds to train yourself to correct this terminally bad habit, and reap the benefits forever. 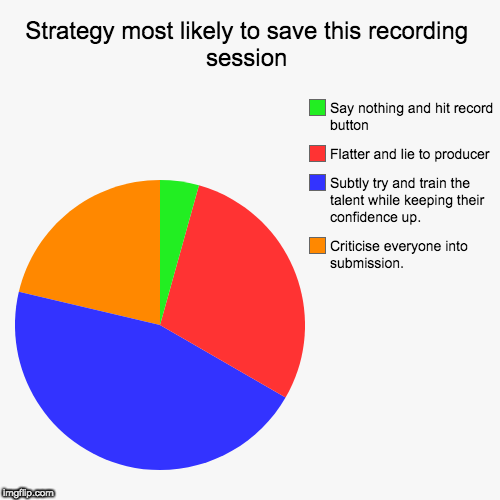 One day soon you will be finished working on whatever audio related task you are currently working on and you and others will judge it as a finished product. Lets say your work was recording and delivering a voice over, imagine all the different factors that add up to make that 100% finished piece of work, and how much influence each one plays on determining the quality of the final product.
So knowing this you now understand that whether your custom-made-externally-powered-microphone is connected with a hifi-branded-gold-plated-cable constitutes maybe 95% of the final quality of the recording, with the other 5% being determined by whether the Voice Over artist can read words on a page confidently. Oh wait maybe I have that the wrong way around…
Once you start habitually visualizing this pie chart, you can start to make a few interesting observations, the first of which is that there is often a huge disconnect between what seems to be important and what is actually important. Here are some things that are often critically important, as in the success of the session can depend on them critically important:

A. Whether the performer has confidence, and is physically well and able to concentrate.
I have worked with producers who were so critical of their talent that they managed to reduce the performer to a nervous wreck, thus ruining their own session. Some even drive their talent so hard and for so long that the talent’s voice becomes fatigued and they become physically unable to work.

C. Whether the communication lanes are open.
Once you are in the land of lyrics/words/music you are basically in a made up land where people may or may not share a common vocabulary. People struggle to describe what they want in this land and they are constantly grasping for ways to express what they mean. The producer asks for another take, after thinking about it for a while the simply say they would like it to sound a bit more “misty” and a bit less “purple”. The producer is out of their depth and literally lost for words. The talent meanwhile has done their best to interpret these useless instructions. They associate the word “purple” with something imperial and they don’t understand the word “misty” as meaning anything, so they give an authoritative, imperial sound read. Back in the control room. The producer actually meant Purple as in “silky, you know like Cadbury chocolate purple” (but of course didn’t say this). The producer is angry that this new read is the opposite of what they wanted. The talent is silently frustrated at the awful direction but can’t say so. The success of the session hangs in the balance, how are you going to fix this audio?

D. There is one other one but I’ve forgotten what it is.
Oh wait- thats right. Its whether all the technical stuff is 100% nailed down and correct. Its a smaller slice of the pie, but still an important one.

Ask yourself, whatever audio situation you are currently in, what is the biggest slice of pie determining the outcome here? That is where you should focus your energies.

Often in audio we are comparing something to something else, and trying to make some kind of decision. Maybe we want the best speaker, or microphone for the job, or the best sound card. I have met countless people, often voice over artists but also musicians, and certainly many audiophiles, who have been absolutely fleeced by an unscrupulous salesperson because they weren’t sure if they could perceive a sonic difference between two things, and decided to take someone elses word for it.

I once worked with a vocalist who assured me with absolute confidence that he would only ever sing into a certain microphone because it had a custom made external power supply, and so it sounded better. It turned out some charismatic audio engineer at a high end mixing studio had convinced him of this during a session one day. He carried this belief around for years and it cost him a lot of money. But the truth was, if he had put that ludicrously expensive setup side by side with a Neumman U87 running on standard phantom power, and a third generic large diaphragm condenser, and put a blindfold on, he would have been able to pick the “special” mic out of the group no better than 1/3 of the time- exactly equal to chance. Imagine how horrified this musician would have been to learn that Michael Jackson recorded the vocal for Thriller on a simple SM57, a dynamic mic so humble its most often found miking the snare drum on stage at your local live music venue.

An ABX test is simply made up of three objects. For example speaker A and speaker B, the two speakers you might be considering purchasing, and a third speaker X you are not considering purchasing. You have someone scramble their presentation to you, make them all equally loud, and you record how consistently accurate you are at picking which is which. If you can’t reliably pick speaker A out of the line up, then you know- this is not a meaningful decision for you.

Following this rule will protect you from salespeople, audiophiles, but most importantly from yourself and your own delusions. It will make your mixes better. Hell, it will make your entire life better if you apply it more broadly, because it is a simple yet rigorous scientific method that cuts through the bullshit and gets the the truth of what is really going on.

A final cautionary tale about self delusion left unchecked. I once met a baby boomer audiophile (with lets be honest, pretty serious hearing loss), who was just crazy about his “High Res” audio system, which he had in his home, but which for some reason also never sounded quite to his liking. He constantly engaged us to help him then rejected our help. When I finally got to the bottom of this unscientific mess of audiophile inspired nightmare, I realized that he had mixed a bunch of different snake oils together. One was he had gotten himself an “UP RES” system which “magically” took whatever audio you put into it and converted it into a higher resolution. So it sounded better. Of course.
But hang on a minute, if you reading this you are quite likely digital native aren’t you. So lets say I take a black and white film and convert it into 4k- is it now in 4k? Does it magically spring into color and have thousands more pixels of detail? Of course not. This poor guy also had room correction software (which is a real thing) in a room that was a perfectly square cube, and had zero acoustic treatment, as in nada.

So in conclusion: Respect the technicals, work on your communication skills, and develop a methodical approach to decision making.
Oh and one more thing. Next time I am going to tell you about my secret vst plugin that makes EVERYTHING, and I mean EVERYTHING sound better. I mean you don’t even need to know what your doing and it works like magic. This secret weapon will make your mixes sound killer and fresh and phat, so fresh you won’t even be able to eat or move ever again after you hear your track with this secret vst plugin on it. Yeah so stay tuned.